Medical Errors: 3rd Leading Cause Of Death. Chelation: Only 1 In 25,000 Got Cancer

Download: Medical Errors: 3rd Leading Cause Of Death. Chelation: Only 1 In 25,000 Got Cancer

Martin Makary, a professor of surgery at the Johns Hopkins University School of Medicine who led the research, said “It boils down to people dying from the care that they receive rather than the disease for which they are seeking care.”

251,000 deaths per year equates to nearly 700 deaths a day (like two airplanes falling from the sky), about 9.5 percent of all deaths annually in the United States.
Sixteen years ago Dr. Barbara Starfield published an article in the Journal of the American Medical Association (JAMA) that revealed that doctors are in fact the third leading cause of death in the U.S.(2) And what was the response? Silence.

Frederick van Pelt, a doctor who works for The Chartis Group, a health care consultancy, said another element of harm that is often overlooked is the number of severe patient injuries resulting from medical error.

“Some estimates would put this number at 40 times the death rate”
– van Pelt said.

It means that every year in the US, there are 10 million severe injuries as a result of medical errors.

The researchers did not look for fatal errors that occur in average doctors’ offices.
If we round off the new 250,000-death figure and assume 300,000 deaths in the U.S. per year as a direct result of the mainstream medical system, we get three million deaths per decade and one hundred million severe patient injuries per decade. Over a ten year period, every third person is affected, yet, there is silence.

While the U.S. has only 5 percent of the world population, 75 percent of all prescription drugs are taken in the U.S. 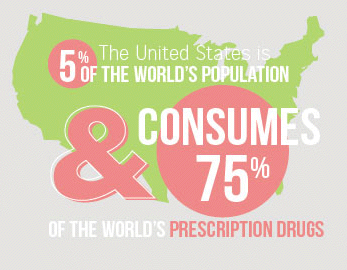 People In The U.S. Have The Shortest Lifespan Of Every Industrialized Country

Did you know that the FDA has passed to the market almost 50 drugs since the 1970s, however, they were later pulled from the market after death and patient injuries?

Have you heard about the yearly 250,000 death in the mainstream news?

If there is widespread silence about medical errors than nothing has to be changed, right?

Chelation To The Rescue?

Dr. E.W. MacDonagh who was the founding member of the International Academy of Preventative Medicine has chelated approximately 25,000 patients when he noted that contrary to national stats, which show the incidence of cancer is one in three (suggesting that 7,500 of his patients should have contracted cancer) but among those who did not have cancer before visiting his clinic, only one has ever later been diagnosed with the ailment.(3)

The famous Swiss study pointed out that chelation reduced cancer mortality by a staggering 90% over 18 years. Death from atherosclerosis was also reduced.(4)

Have you heard about these liberating news?

Who controls the mainstream media?

Increasingly it’s recognized that higher toxic levels, together with stealth infection (rearing its head as the toxic load suppresses the immune system), are linked to chronic diseases as we all try to function with 80 000 man-made chemicals in the environment, 700 contaminants in the average adult and 200+ industrial chemicals and pollutants in the umbilical cord blood in the newborn. Proper detoxification and the targeting of microbes results in reduced inflammation everywhere in the body and are the cornerstones for a longer, healthier life.

Why Edta Chelation (With The Added Glutathione) Is The Best?

There are many choices for detoxification and any detoxification is better than passively waiting for the doctor to tell you that you need a bypass or you have cancer.

We are convinced that our detoxification program (with StemDetox, ToxDetox, and StopReabsorb) is the most complete as it addresses all aspect of cellular detoxification, including de-calcification and bowel cleansing, without cutting the corners. The components of our program are synergistic and benefit each other in ways that maximize outcome.

“I’ve started to take StemDetox only two weeks ago. However, I already experienced such profound changes that I’ve never had.
I’m not hungry, and I don’t desire chocolates and carbohydrates, yet, I was dying to have these daily. I eat less now and I’m not hungry. I don’t really know if I’ve lost some weight, but I definitely feel lighter inside.
I have improved digestion. I could never really drink a lost. I drank 3 to 4 caps of water daily, with difficulties. Now I just want to drink all the time, altogether about 2,5 to 3 liter of water per day.
My aging skin is fast improving.
I always had a headache when the weather was changing. But not anymore.”
– by Bea J.

Our program targets the removal of toxic metals (EDTA) and all toxins (Glutathione), de-calcifies the whole body – including the arteries, the prostate, and the brain (removes brain sand), busts biofilms, kills microbes and fungus (EDTA, StemDetox and PreventPro), kills all viruses (Glutathione – if Selenium is added), enhances the immune system, strengthens the bones, gives back the sharpness of the mind, solves prostate issues, elevates the stem cell count and lengthen the telomere, and helps avoiding the most dreaded chronic diseases.
This is real precious 1 in 25,000 freedom.

“I took them for avoiding the By-pass but got more out of it. My prostate was fixed in three months. No more waking up and going to the bathroom! I never thought that this was possible. I tried the drugs my urologist gave me and tried supplements for my prostate but only your stuff worked. And my sex life is coming back again. Frankly, these are more important to me than my narrow arteries. But they also opened up by about 5 months. I don’t care about why or how but your StemDetox and ToxDetox did the trick for me. My mind is clear again and I have more energy. I switched now to maintenance. I never want to go back again. Keep up the good work.”
– by David K.

We admit that the marketing efforts are better for most other detoxification programs out there. However, we are repeatedly vindicated when doctors and individuals tell us that the ‘sublingual spay’ or sauna is not effective enough or the ‘Quicksilver’ program didn’t address the calcification of the arteries, the brain or the prostate, neither the high glutathione needs. And most programs, including IV chelation, ignore the health of the gut. We don’t.
At the end, our superior results win over slick or ‘big-words’ marketing.

Be smart, be well,

(2) America’s Healthcare System is the Third Leading Cause of Death, Barbara Starfield, M.D. (2000)