Until recently, most doctors and health care professionals assumed that toxic heavy metals had to be looked at only when a patient showed definite symptoms of toxic overload.

All life processes have a biochemical and energy components, expressed by subtle electromagnetic and photon changes, and increasingly charaterised by quantum physics.

All electrically active metals (metal ions) and particularly heavy metals can disturb the biochemical reactions and the harmony of the electromagnetic and photon energies in the body, upsetting the matrix, increasing free radical damage million-fold and causing disharmony and disease. 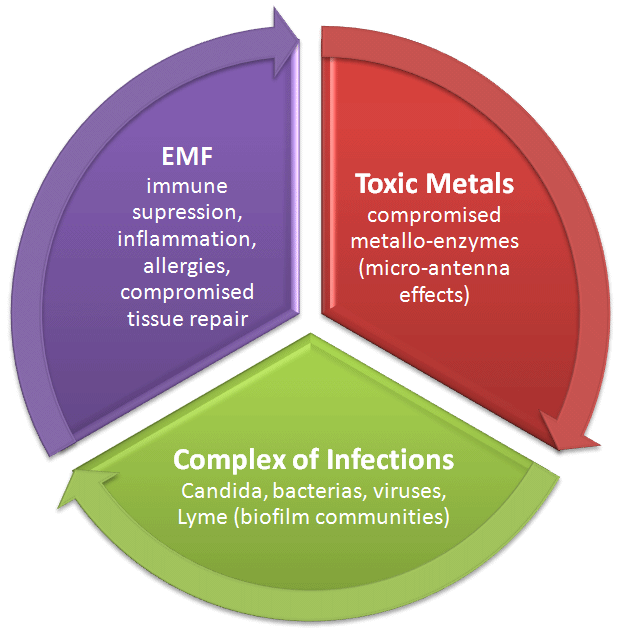 It is electrically active heavy metals, not the metals that are bound with organic complexes, that cause the formation of free radicals and destroy molecular compounds. A healthy body is able to bind (i.e. chelate) free heavy metal atoms, i.e. neutralize their electromagnetic charge up to a tipping point. If this mechanism is no longer able to function because too many toxins have bio-accumulated in the organs, the number of free radicals will fast increase, especially if at the same time there is an antioxidant deficiency, most notably (reduced) glutathione deficience, a hallmark of all chronic diseaseses and aging itself.

We face a choice today when chronic disease is linked to depressed glutathione levels (the master antioxidant in our body), and aging is increasingly described as the result of free radical damage, inflammation and the ‘rusting of our body’.

Either we continously increase the intake of antioxidants as we get older to quench the fire of inflammation or we reduce the production of free radicals, among other things, by reducing the toxic heavy metals in our body.

It is a better choice to target a cause of diseases and aging itself by the removal of toxic heavy metals instead of taking ever larger amount and variety of antioxidants, touted today as the ‘solution’ for reduced inflammation and anti-aging.

A new and highly disturbing aspect of metal accumulation is its changed properties when the body is effected by certain electromagnetic field (EMF) radiation, such as cell phones, WiFi, microwaves, dirty electricity, and in general terms: electrosmog.

The metals act as antennas that magnify the negative biological effects of electrosmog. The effect is present on the cellular level and also in the mouth where there are amalgam (mercury-silver) fillings.

An important aspect of the the EMF-metal interaction is that the special bond becomes much stronger that keeps the metal tightly in complexes with the metallo-proteins. This change in relationship results in compromised detoxification and poor excretion of metals.

The changes in the charasteristics of metallo-proteins (half of them are metallo-enzymes) means that it is advised to reduce the metal load if the goal is to reduce the short and especially the long-term negative aspects of EMF radiation (e.g. lowering the chance of a brain cancer by heavy mobil phone users).

At the same time, the maximum metals can be eliminated only if we actively reduce the EMF the body receives while going through a detoxification period. At least over the nights when we sleep, that is the most important time for natural detoxification when the melatonin levels are the highest, the lowest possible EMF electropollution should reach the body for the most effective metal mobilization and detoxification. Just switch off your cell phone and Wi-Fi whenever you can, especially when you sleep.

Infectious diseases and the toxins of infectious agents play a surprisingly important role in most chronic conditions, from ulcer to arthritis, and Alzheimers’s to diabetes (fungal toxins), and Autism (MMR viruses) to heart disease and even cancer (when microbes life inside cancer cells (!).

Since the immune supressing effects of toxic metals allow infections to flourish, its exceedingly important to reduce the metal load before a more specific disease specific modality is employed.

“Heavy metals can weaken our field through their frequency outputs by modulating compatible frequency components of the body resulting in a weakening of the field thereby causing unhealthy biochemical changes. If you have accumulated toxic metals in your brain, and since your brain is an antenna, you can actually receive more cell phone radiation, which in turn can cause the microbes in your system to overreact and create more potent mycotoxins. This can create a never-ending vicious cycle between the microbes and metals in your body and your exposure to electromagnetic fields, which can lead to hypersensitivity. I have seen that a high percentage of illness including chronic infections are caused, and/or aggravated, by electromagnetic field exposure. Then chronic fatigue, fibromyalgia and other chronic pain syndromes can easily develop or worsen.” – Theresa Dale, PhD, CCN, NP

Infecting microorganisms commonly bind tightly together and hide behind a biofilm – a matrix of non-cellular matter, blood components, and mineral crystals, – with channels for diffusion of nutrients, oxygen and water. Microorganisms hiding behind biofilms are resistant to normal immune responses and to antibiotics. More than half of human infections and 80% to 90% of non-responsive infections are protected by biofilms.

The impenetrable semi-crytalline biofilm matrix is strenghtened by calcium, magnesium and metals. EDTA weakens biofilms by binding to and mobilizing calcium, magnesium and metals. EDTA also causes structural damage to bacterial and fungal cell membranes, making them more exposed to antibiotics and anti-fungal compounds. In fact, EDTA showed a very strong anti-fungal effects on its own when it was compared to anti-fungal drugs in a study.

In an exciting study EDTA turned 70% of the bacterial strains turned from resistant to sensitive when a well known (and often multi-resistant) bacterium, Pseudomonas aeruginosa was studied.

Now its easier to understand a contraindication of EDTA. It is suggested that EDTA should not be used by those who have tuberculosis (TB) since the biofilm that protects the tuberculosis bacterium (Mycobacterium) – and also keeps those bacteriums hiding and localised – is penetrated by EDTA and might results in the spreading of the TB within the body. Certainly, if the bacterium is attacked with concurrent use of antibiotics, then the use of EDTA is highly benefitial. While it is stated that EDTA inhibits mycobacterial growth even in trace amounts (4), presumably the spreading of the bacteriums due to the erosion of the biofilm is the concern.

Therefore, one could claim that EDTA in TB and in most bacterial, fungal and viral diseases represents a two-edged sword as it opens up the infectious agents for either further spreading or control, if at the same time (natural or synthetic) anti-bacterial, anti-fungal or anti-viral agents are present in the body.

The concurrent use of EDTA chelation suppository (ToxDetox with its Glutathione and EDTA synergy; or any of the EDTA only products: EDTA2.0, EDTA1.0, EDTA0.5) and (natural) anti-bacterial, anti-fungal, and anti-viral ingredients, such as found in StemDetox, provides the ultimate fighting capacity in the hands of those who desire to control complex infections.

Indeed, I formulated StemDetox years ago, once I realized that the negative effects (Herxheimer reaction) of EDTA chelation, even if they are rare, mostly linked either to the flare-up of bugs or to the elevated toxins released by the bugs as a protective mechanism.

I formulated ToxDetox with its high level of reduced Glutathione (600mg) in combination with Ca-EDTA (1,600mg) to create an entirely new class of chelation product that makes chelation much safer, much more effective (over three times more effective than EDTA only or Glutathione only applications) and provides a high level of Glutathione to supercharge the immune system exactly at a time when the immune system is always compromised (in the middle of detoxification when the metals are mobilized).

Consequently, the ultimate detoxification protocol has to have the following key ingredients:

One can increase the effectiveness and shorten the time of detoxification if you follow my Detoxification Protocol.