We step beyond the necessary basics of keeping our Vitamin D, Zinc, and Vitamin C levels high.

Crucial steps that doctors are hiding

Currently, no research supports the use of any drug or supplement to protect against the current viral epidemic.
Consult your doctor before using drugs or natural health products.

We’re not alone to believe that the second wave of the coronavirus, hitting us from around October, will be much worse than the first wave. Likely, the start of the regular flu season will coincide with the beginning of the second wave, further compromising our immune system.

We should all prepare now for the deadlier second wave by raising the level of both outside and inside protection. Hiding, putting on a high-quality mask (we plan to sell the highest quality…), and washing our hands will not be enough.

Now is the time to prepare medically, physically, economically, and spiritually for what is coming. Moving away from big cities, if this is an option, could be a life-saving plan for you and your loved ones.

Be ready for the 2nd wave by the end of September.

Heavy-handed politics, greed, and power-hungry leaders drive the official responses. This includes the touting of a vaccine as our ‘savior’. Alternative angles are squashed on YouTube and other social media, robbing us of an open and intelligent discussion.

Those who have eyes can see that our capitalist economy is turned into a socialist government led by leaders with dictatorial control. 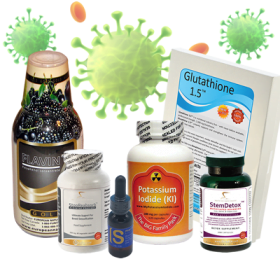 Vaccine developments of previous coronaviruses were not safe and successful.

We should all have the God-given right to control what enters our body and to refuse the coming vaccine. We can’t trust it unless proper animal and human studies confirm its safety and efficacy. I fear that the vaccine will suppress the immune system and will cause more harm than good.

What is the best ‘at-home’ immune-boosting protocol?

Over 80,000 synthetic toxins in the environment and the 700 toxins we all carry (on average) interferes with the fine-tuned functioning of the cells in our body.

Without much thinking, the average woman puts 515 synthetic chemicals on her body daily (overnight Glutathione is best to remove these chemicals).[1]

Babies are being born with over 250 toxins passed on by their mothers in the (toxic) womb.

Focus on the reduction of the toxic load inside and outside

The layered immune strategy hinders the virus’s route as it tries to enter destroying our body.

Tools for the Layered Immune Boosting

is at the heart of the strategy with its antiviral detox effects.

The 50+ ingredients in StemDetox could be compared to a fine-tuned orchestra where the balance and harmony make the outcome so great.

A pilot study, when 36 urine samples were collected, confirmed the ability of StemDetox to remove toxic heavy metals.

StemDetox covers the two main goals, the desired (immediate) antiviral effect, while the toxins are chipped away for a better functioning immune system.

Beyond its antiviral effects, the herbal anti-microbial effects keep the bacterial load under check rounding up its multi-faceted benefits.

StemDetox is a kind of jolly-joker when it comes to supporting the body in our current, complex threats.

is a great-tasting fruit extract that is, I’m convinced, the best flavonoid product on the market today.

At least 40% of the cancer is caused by viruses

That is the highest limit scientists go today.

In reality, about 80% of cancer is likely caused by viruses

The strong virus suppressing effects of flavonoids might give us a clue about their role in cancer strategies. If flavonoids are antiviral, they also curb cancer. Indeed, they are widely and successfully used against cancer in Europe.[9] They are also powerful in reducing or eliminating most of the negative effects of chemo and radiation.

Flavanoids are a powerful force of nature that supports our body when we fight viruses, cancer, or aging itself.

is highly relevant in:

The benefits of StopReabsorb/Charcoal are legendary. Ideally, we all should take a gram of Charcoal an hour before we go to sleep in our toxic world as detoxification always speeds up overnight.

Each year, infection with Plasmodium falciparum causes 400–600 million cases of malaria and up to 1 million childhood deaths in Africa. Pro-inflammatory cytokines have a long-standing association with the outcome of malaria. An exciting charcoal study confirmed its surprisingly broad systemic effects on immune and inflammatory processes. Charcoal prevented mortality associated with malaria.[11]

Charcoal is so cheap that it lacks advocates for its amazingly wide range of beneficial effects in Detox, immune balance, and anti-aging.

Glutathione’s role in the immune system

Glutathione supplementation is especially recommended in the elderly who have low levels due to immunosenescence and in individuals with chronic inflammation, such as those who are overweight or obese.[13]

Glutathione is not only important in many immunological processes but also modifies complex immune reactions such as fever.

Fever is induced by oxidative stress, initiated by viral or bacterial infections (or toxins). Glutathione reduces fever and normalizes the immune system response to oxidative stress. It is a good idea to keep Glutathione suppositories at home for a time when fever is encountered.

According to the most recent medical reports, 72% of ‘viral disease’ patients who are admitted to hospitals are overweight or obese. Obesity is correlated with oxidative stress, inflammation, low level of Glutathione, and low level of vitamin D3. Glutathione is paramount to raise vitamin D3 levels to mount a strong immune defense against viral and bacterial infections. Consequently, supplementation with both Glutathione and vitamin D3 is beneficial if the goal is to keep oxidative stress low and the immune system healthy.[14]

Glutathione expresses its antiviral activities through macrophage cell lines that are independent of its antioxidant and anti-inflammatory actions. A European study helped us to understand why Glutathione’s high level is so critical in the body’s antiviral defense. Contrary to previous studies, it was finally concluded that endogenous Glutathione plays a pivotal role in the establishment of the innate immune responses to viruses, acting as a signaling molecule with a mechanism different from simple scavenging of ROS (reactive oxygen species). Viral replication results in Glutathione depletion, and likewise, high Glutathione level protects against viruses.[15]

Another study further confirmed that Glutathione’s antiviral activity is not related to its antioxidant role.

Glutathione fine-tunes the activity of macrophages, a special immune cell line. Cells of the macrophage series can play a major role in the ability of the host to defend against viral infection.[15]

A recent study confirms the beneficial effects of Glutathione in counteracting the cytokine storm in patients. Glutathione is abundant in most cells, but is the most abundant antioxidant in the airway epithelial lining fluid, and acts as a vital intra- and extracellular antioxidant protection against oxidative stress, helping to decrease pro-inflammatory processes in the lungs. This is the same epithelial lining fluid or mucosa where Potassium Iodine expressed its robust and protective effect.

In a recent trial study, 2000mg of IV glutathione was administered to fast improve the patients’ dyspnea within one hour of use, confirming Glutathione’s fast-acting power in cytokine storms.[16]

Arguably, an elevated level of overnight Glutathione might be more important than the elevation of daytime Glutathione.

Glutathione emerged as the ‘king-maker’ in our quest to find the most critical supplement in our layered immune protection.

A fascinating US study confirmed

“the identification of a new prophylactic or therapeutic approach, achieved by the administration of a single dose of 130 mg of oral potassium iodide to prevent or ameliorate respiratory viral infections”

“the oral administration of KI in human subjects increased serum iodine concentrations and yielded iodine concentrations in the upper respiratory secretions that supported the antiviral activity of airway epithelial cells ex vivo.” “systemic supplementation of iodine alone might be sufficient to inactivate the virus.”

This study has broad implications for human health, especially amid a respiratory viral pandemic.[17]

This is bombshell news!
The neglected (by all doctors worldwide) potassium iodine represents an eloquent way to support the body against the onslaught of viruses right in the respiratory mucosa before it can harm the cells.

is critical in any intelligent antiviral strategy. Unfortunately, most selenium supplements are limited by their toxicity if high doses are taken. SmartSelenium 1000 is an exception as it supports the entry of 1000 times more selenium into the cells and can be taken in very high doses without the fear of doctors typically have with high selenium supplementation. SmartSelenium is widely used by cancer patients.

Each drop of SmartSelenium 1000 contains approximately as much Selenium as 5 brazil nuts. Start slow with one drop of Smart Selenium, every second day.[18]

Selenium’s antiviral usage is often overlooked due to its toxic effects. SmartSelenium 1000 opens up a new chapter to harness its usefulness.